I have updated information on the Bardog Alley Party, to be held in the alley next to Bardog (“Scratchy’s Alley”) on Sunday, August 18. A couple of new events have been added, and when I read about them, I thought, “Aldo must have thought ‘How can I make Paul Ryburn like this party even more’ when planning them.” The first new event is an “All Around the World” beer tent where you can pay $20 to sample 10-15 beers from 11:30 to 5 PM. The second, which I mentioned yesterday, is a poker tournament in the Underdog Room. It will start at 3 PM, there will be a $30 buy-in, and some great prizes will be awarded.

Events which will be coming back from last year are the Bardog 5K at 9 AM, post-race party afterward, dunk tank, food from Bardog, live music, and a meatball eating contest. The raffle will be back, with many big prizes to be given away, including two Fat Tire bikes. All money raised goes to St.Jude. Aldo hopes to hit the $35-45K range this year. Complete details of the party and race registration can be found here.

The Silly Goose will provide signature cocktails at the Phoenix Club’s 4th annual “Party at the Palace” at the Pink Palace Museum. The party will be Saturday, August 24 from 6 to 11 PM. There will also be a DJ, food trucks, and beer trucks. Tickets are $25 in advance, $35 at the door and can be purchased here.

Chef Gary Williams blogged that the Downtown Dejavu location at 51 S. Main will open in a few weeks. The Creole restaurant’s original Florida Street location will remain open. The new restaurant will have extended hours (11 to 10). It will also have a few new additions, including beignets and cocktails. When it opens, Downtowners won’t have to go to Beale Street to get a Hurricane.

Grizz is on his way to Manila, capital of the Philippines. The Grizz Girls are currently touring China.

My friend Air Traffic Mike was working the Italian ice stand at Main and Union last night and I snapped this pic. 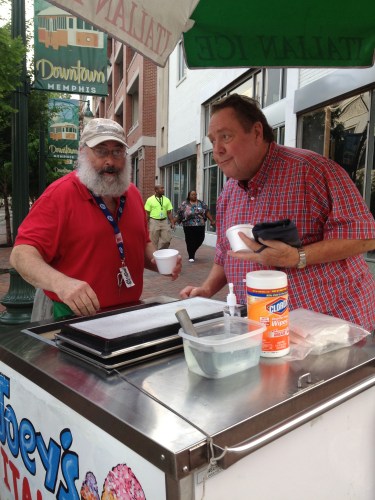 Mike is on the left with the Santa Claus beard, serving Uncle Ray. He had lemon, mango, blue raspberry, and orange-vanilla swirl flavors yesterday. Not sure if the flavors rotate by day. I had the lemon and it was very good. Mike told me the mango is a big hit too. He’s watching the stand for friends who are out of town, and he will be at Main and Union for the next week.

The Memphis Public Library will host a JobLINC Career Fair tomorrow from 10 AM to 3 PM. It will be at the main library at 3030 Poplar, in Meeting Rooms A, B, and C and the Gallery. The library advises job seekers to bring plenty of resumes and dress for success.

I’ll be out after work as usual. Silly Goose will be the likely first stop tonight.