The website midtownkrogers.com has put up an announcement that the @MidtownKrogers_ (with the _ on the end) is a fake fake account. The real fake account @midtownkrogers will be back as soon as their suspension is lifted. You can also see a complete screen capture of all the @midtownkrogers tweets on the website. Come on, Kroger Corporate, have a sense of humor and request that the account be un-suspended.

For those of you wondering about the new menu roll-out that will happen at the Blind Bear tomorrow, I have confirmed with Jamie that the pepper jack mac & cheese will still be around.

Arkansas lost 45-33 to Texas A&M yesterday, but at least the Hogs looked competitive against a Top 10 team. As opposed to Ole Piss who put up a goose egg against Alabama. It must be embarrassing to be a Rebel fan today. And every day, really.

Arkansas’ next game, against Florida, will be Saturday at 6 PM on ESPN2.

Tamp & Tap is doing their Bluegrass Brunch until 3 today. Crawfish mac & cheese? I may have to check this out.

I almost got to eat at DeJaVu for the first time yesterday. About 4:15 I wandered up there for lunch, but apparently DeJaVu is one of those restaurants that closes between lunch and dinner. “Please come back at 5,” they told me, and I would have except I had a ticket to Memphis Oktoberfest at 5. So I ate at Havana’s Pilon. I hope to try it soon. I see some of my friends ate there last night and had plenty of compliments about the new Creole restaurant. 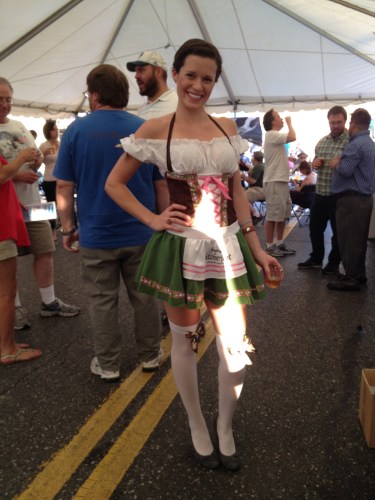 I thought the beer festival was very well done. Fest attendees got their choice of a collector’s mug filled with the beer of their choice, or a sampler glass to try five different beers. I got the sampler glass and focused mainly on the seasonal beers. Good stuff! There were a couple of food trucks and authentic Oktoberfest beer-hall music. Once the Arkansas game started, though, I was inside watching TV.

That’s the news for this Sunday. Brunch at the Majestic starts in 5 minutes and I haven’t showered, so it looks like that will not be on the agenda for today. I’ll be at Blind Bear when it opens at noon.