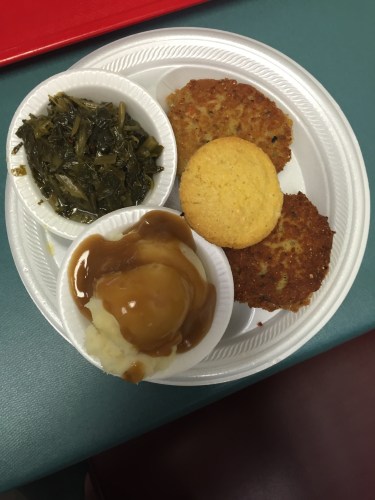 I’m working from home today, giving me a different set of lunchtime dining options than I am used to. Today I tried a restaurant that has been on my to-do list for a couple of years: Willie Moore’s, on North Main near Adams. Willie Moore’s is a soul food joint that used to be on South Third. I wanted to try the neck bones but they didn’t have them, so I got salmon croquettes with cornbread and side of turnip greens and mashed potatoes. Very, very good.

(Rodger: They didn’t have chicken fried steak, in case you were wondering.)

Best Memphis Burger Fest is this Saturday at Tiger Lane by the Liberty Bowl. 35 teams will compete in Best Bloody Mary, Best Veggie Burger, Anything But Beef, Exotic, and Best Memphis Burger. As of yesterday I have confirmed that the Moody Ques (who brought home a trophy from BBQ Fest ’15) and Squeal Street BBQ (who brought home a certificate of participation from BBQ Fest ’15, because everyone is special!) will have booths next to each other at Burger Fest. There will be live music by Lost Cause, Seeing Red, and Southern Edition, food and beer vendors, and a cornhole tournament. Admission is $10 and proceeds benefit Memphis Paws. In a few short years this has evolved into one of Memphis’ best outdoor fall festivals. Come check it out!

Speaking of the BBQ team, our team president is traveling this week and she stopped at a Whataburger. She got the chicken. At Whataburger. I have no words for this.

Sometimes on the weekends I make impulse purchases. On Saturday I decided it would be a good idea to pay $4.79 for a vegan chocolate bar. I had never had one before and wanted to understand how it is different from regular chocolate. Readers, I make mistakes so you don’t have to. I learned that “different” meant “not nearly as good.” Unless you are a vegan yourself, don’t bother.

The MBJ has an article about Creative Works, a conference that showcases Memphis as a “city of choice” to creative professionals.

Interesting article about the Pinch District that came across my Facebook news feed this weekend: The Lost Jews of Memphis

45 South Main, most recently a pizzeria and convenience store, now has a sign that reads, “Maciel’s Tortas and Tacos”

All right. Back to work. I’ll be out at Melissa Monday at Bardog for happy hour.