“Hey hottie! Hey sexy! I love the way that hair blows in the wind!” I looked over and people in a Nissan SUV were taking a video of me walking down South Main toward the Farmers Market.

Don’t be alarmed… it was just two of my fellow Sunday brunch crew regulars, Rahul and Tony. They were hungry, so we decided to make a trip to Earnestine & Hazel’s so they could get Soul Burgers. Tony was unaware that the place was a brothel until ’92 and bartender Clarence gave him a walkthrough of all the memorabilia on the walls.

I checked in on Swarm by Foursquare, and got an unexpected message: “You are 1 day away from becoming mayor.” Foursquare is an app/game many of us play down here. If you check in more than anyone else at a venue in 30 days, you become “mayor” of that venue. This past week I was at my all-time peak on Foursquare. holding the mayorships of Brass Door, Bardog, Blind Bear, Silly Goose, and the Farmers Market (although I lost that one yesterday). The good thing about E&H that I am friends with the current mayor on Foursquare… and he is out of town! That’s one of the few Downtown mayorships I have never held, and it will be a fine replacement for the Farmers Market. I would say a trip to E&H is pretty much mandatory this afternoon.

“Who’s working the Bear today, Pau Pau?” Tony asked. That’s his pet nickname for me. Isn’t that sweet? I replied that my favorite pair of librarian glasses has the Saturday day shift. “No, she’s out of town,” Tony told me.

“It’s probably Mary then,” I told them.

“Let’s go see Mary!” they said. “Come on, Pau Pau, you can ride with Rahul.” It would be one of the rare times I was not at Bardog at 11 sharp on Saturday, but sometimes you gotta roll with spontaneous adventure. We parked in the Peabody Place garage. You know those people who take the elevator from the second floor to the first floor instead of just taking the stairs? Yeah Rahul is one of those people. If you know him I am sure you are not surprised.

My visit at Blind Bear was short-lived, however; soon my phone started blowing up telling me I was in trouble for 1) not being at Bardog at 11; and 2) not bringing the bartender mint as I had promised. About 11:30 I walked down there. It’s nice to be missed I guess.

Later in the day I started to get hungry. Maciel’s has become such “the Saturday thing,” because it’s so good, but I decided I wanted something different this week. “What’s the exact opposite of Mexican?” I thought. A place I rarely go came to mind: Spaghetti Warehouse.

I guess there are two main reasons I don’t go to Spaghetti Warehouse much. For one, it’s off the beaten path. When I think where I want to eat, I mentally take a walk down Main, Union, Second, the well-traveled streets. At Huling and Wagner, Spaghetti Warehouse is off my radar. The other thing is, it has a stigma of being a place to take kids and tourists. That’s a shame because the food there is perfectly fine. It’s not a 5-star restaurant but it doesn’t try to be. It’s the Olive Garden of Downtown, but you know what? Once in a while I liked to eat at Olive Garden.

I was torn between my two favorites: The beer chili spaghetti and their signature 15-layer lasagne. After a few minutes of pondering I decided to mix it up a bit: I ordered the lasagne, but topped with Alfredo sauce rather than their tomato sauce. 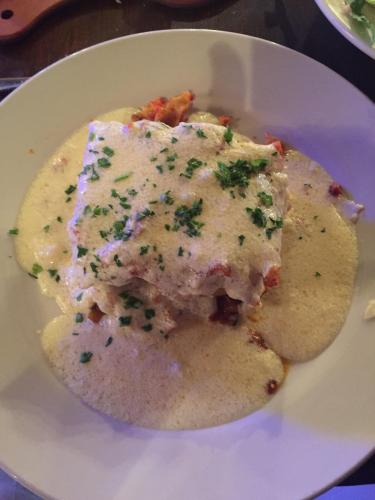 This was really good. I love Alfredo sauce and theirs was rich and there was plenty of it. Service was excellent too. I enjoyed my visit and will have to think of SW more often.

I couldn’t go to South Main without paying my respects to Max’s Sports Bar, so I walked in that direction, using a second visit to Earnestine & Hazel’s as a staging ground waiting for Max’s to open at 4:30. Once I got to Max’s, I played it smart – one glass of water for every beer I drank. I have learned my lesson about getting dehydrated in the summer heat and don’t plan to let that happen again. Bartenders, I am going to be asking for a lot of water these next three months.

By staying hydrated, I was still full of energy at 9 AM. “Hey, you know what’s open now?” I thought to myself, “Nate’s bar!” I paid my third visit to Earnestine & Hazel’s of the day, walking up the stairs to the second floor where the whores used to take their customers back when the place was a brothel (1960-1992). The back part of the second floor as has a tiny bar, tended by a gentleman named Nate who has been there more than 20 years. You are not a true Memphian until you’ve had a drink at Nate’s bar. He is a great person to pick his brain for knowledge about this city. He’s not a native of the city but he’s been here 54 years.

You know, yesterday was just a really good day from start to finish. Most of my best days down here are shared memory with friends, but yesterday was different. It was just me, spontaneously doing what I felt like all day long.

On to the news. If you want to take your father somewhere different for his day, the Metal Museum is offering free admission to the first 20 dads. They will give away a hook and bottle opener to the dad who can answer a tough question following their foundry demo. The museum is open noon to 5 today.

Belz Museum will show a free screening of My Neighbor Totoro at 12:15 this afternoon. This 1988 movie is rated G and is about two girls who move to the country to be with their ailing mother, and who have adventures with the forest spirits that live there.

The first 1500 in the gate (first pitch 6:05, gates at 5) at the Redbirds tonight receive a pair of adult Cardinals dress socks. Kids under 12 get an ice cream treat (first 2500) and can run the bases after the game. The $40 club ticket special is in effect tonight.

D-RANKS with B-RAD at Blind Bear is first on my list today. B-RAD told me last weekend that I am a brat, and I am feeling EXTRA bratty today. Ready to make it a memorable day. Back tomorrow.