Last night I enjoyed a splendid dinner of pork loin, beef tenderloin, lamb, crab cakes, crawfish cakes, and Wiseacre Tiny Bomb. What was the occasion you ask? Rizzo’s is evolving and they invited some friends over to try out the new menu. They are dropping the diner concept from the restaurant (the new location looks nothing like a diner anyway) and are going after more catering business. Chef Michael Patrick handed out gift bags that included a catering menu, and I made sure to grab a copy. Photos below. (click to view in larger size) 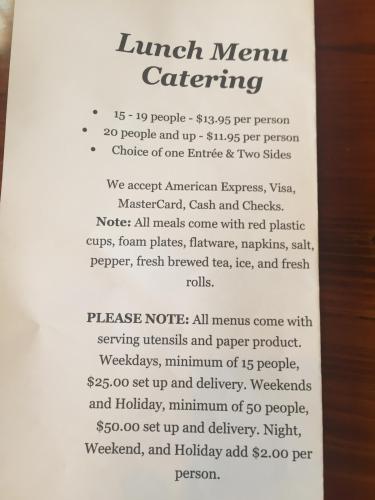 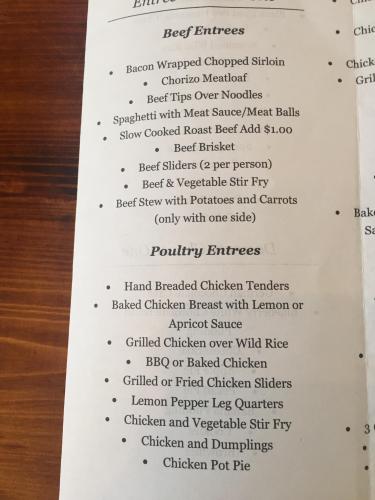 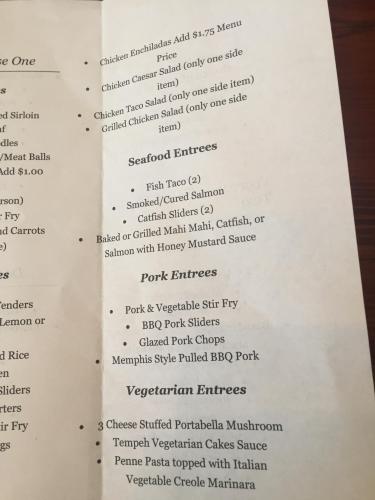 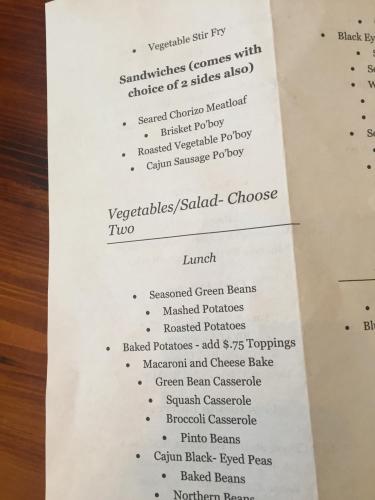 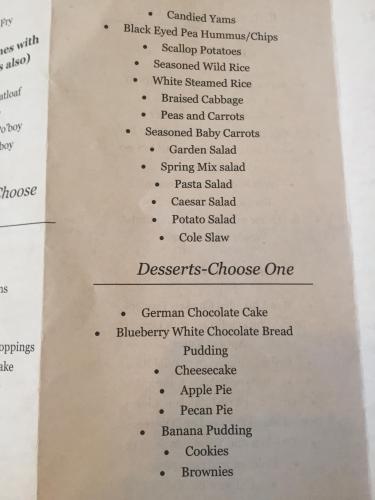 Need to get lunch delivered to your office conference room? Keep Rizzo’s in mind. Their prices are very reasonable and their food is top-notch. They offer night, weekend, and holiday catering too for an additional charge. They have a variety of beef, pork, poultry, seafood, and vegetarian entrees. They do sandwiches, vegetables, and desserts too.

Also in the gift bag was a little jar. “That’s chow chow,” Chef told me. “Put it on some crackers. It’ll make a great midnight snack.” Thank you Chef for the chow chow and for dinner. And thank you to my friends for the great company last night. I got to hang out with many members of Squeal Street BBQ and catch up with them.

In case anyone is worrying… the Lobster Pronto Pup is still around. It made the cut for the new menu.

There’s no better place to watch soccer than The Brass Door, and the American Outlaws are holding their official watch party tonight, Tuesday, June 21, as the USA team plays Argentina.

Ultimate Scavenger, a scavenger hunt all over the city, is coming to Memphis Saturday, September 24.

The Bendy Boozy Yoga class that has been held at the Rec Room on Broad once a month the past several months is adding a new location: Loflin Yard. The first Bendy Boozy class will be at Loflin this coming Sunday, June 26. It is a one-hour, all-levels yoga class followed by brunch cocktails. The class starts at 11 AM, rain or shine. Cost is $20 and they are requesting that payment be made by credit card only.

Next time you’re in the Silly Goose, ask owner Daniel to show you the new artwork on his arm. The tattoo artist? None other than Damien Echols. By the way, Damien tweets some really good stuff. Follow him at @damienechols.

Don’t forget that there’s a Downtown Safety Patrol number you can call if you see illegal activity. It’s 901-281-9146. Last night as I was walking back from Rizzo’s, I saw a guy doing the fake parking lot attendant scam at Main and Peabody Place and called the number. The patrol was only a block away and they got there quickly and made him move on.

If you like beer and feel like making a road trip, the Arkansas Brewers Festival happens over in Little Rock Saturday evening.

I forgot to mention a couple of things that happened at Max’s Sports Bar last weekend. Friday night I did the Gangnam Style dance up and down the aisle. And Sunday night, I adopted a sister! I was talking to a fellow only child and told her, “Generally I enjoy being an only child but given some of the things I’ve been through the past year, I have really needed a sister to talk to.” She told me she understood, that sometimes she wishes she had a brother. So we adopted each other! Cheers to my new sis! We’ll talk soon I’m sure!

That’s it for now, could be a second post later today though. Undecided where I will lead off after work but leaning Blind Bear.