You might want to make a run to the store this week for some Off! or Cutter or whatever bug spray you prefer this week. Right around July 1 every year in Memphis, the mosquitoes start to get really bad and they stick around through October. I just picked up a two-pack of spray at Target that will last me through the season.

I have Memphis Farmers Market news that I am not happy to share with you. A friend of mine ate at the tandoori truck Saturday, and was told that it would be the truck’s last week at the market until September. NOOOOOOOO!

Typically, campaign fundraising emails have less than 10 percent of them caught in recipients’ spam filters, where the recipient is unlikely to ever see the email. However, due to some fundamental rookie mistakes, Donald Trump’s first attempt at a fundraising email saw SIXTY PERCENT end up in spam filters. Of the emails that made it to inboxes, only 12 percent were opened. Twelve percent of forty percent… that means The Donald had less than a 5 percent reach. If the man is too incompetent to even send out email properly, how in the world is he qualified to be president?

I want to send a “thank you” to Tad Pierson of American Dream Safari. Saturday afternoon I was at Earnestine & Hazel’s eating a Soul Burger, when my friends from Squeal Street BBQ told me they were heading south to The Dirty Crow Inn to check out the newly-finished outdoor deck. After finishing the burger I decided to walk down there and join them. I got all the way to Crump when Tad’s ’55 Caddy pulled up alongside me. “The air conditioner is out at the Crow,” my Squeal Street friends told me. “Hop in, we’re going to Max’s.” Tad, you’re a lifesaver. If I had got all the way down there and then had to walk back in 100+ degree heat index, I think I would have just about died! By the way, the A/C was fixed at the Crow later that day, and while I did not make it down there this past weekend, I have seen photos of the new deck and it is beautiful.

I was back at Max’s Sports Bar yesterday for their crawfish boil. You’ve seen crawfish before so I won’t bother posting another pic, but I do have a photo of something at Max’s that might be of interest: Their happy hour specials. 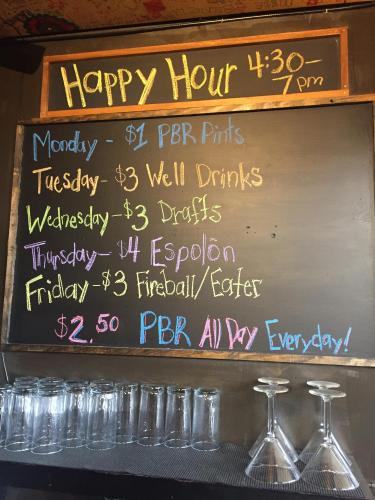 DOLLAR PBR at Max’s until 7 on Mondays. Well, well, well! There may be some Monday visits to my “home way from home on the south side” in my future!

Historian Jimmy Ogle will give a free tour of Court Square and surroundings tomorrow, Tuesday, June 28, at lunchtime. Meet at the fountain at 11:45.

Rio’s acting governor says the upcoming Olympics could potentially be a big failure. There isn’t money for security or transportation. I have a feeling that the Summer Olympics are going to be an even bigger trainwreck than the 2016 presidential campaign.

As of this coming Friday, grocery stores in Tennessee can sell wine.

That’s it for now. Happy hour plans are TBD, but I will definitely be hitting the Blind Bear later, where special guest bartender Mandy Marie will be making a one-night-only appearance. Could be another post later today, so check back.