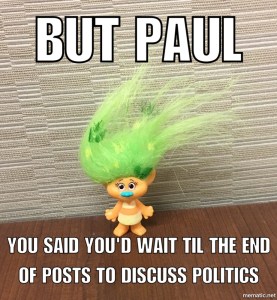 Just got back from my Saturday morning caffeine run to City Market. On the way back, I saw a new business doing good things for Memphis and I thought I’d give them a shout-out. Give Good empowers the life of young adults on the autism spectrum. It offers them a place to work, and a place and purpose within our community. You can buy Give Good toffee at locations around town or in their online store.

The 36th annual Outdoors Inc. Canoe and Kayak Race kicks off this morning at 10 AM this morning. Racers will start at the mouth of the Wolf River, taking them out into the Mississippi River. They will go under the I-40 bridge, come back around the foot of Mud Island, and finish in the Memphis Harbor. Wind, strong currents, and eddies are challenges with which the racers must contend.

Loveland Duren will provide live music at the Ghost River taproom tonight from 6 to 8, and the Sushicide Squad food truck will be parked outside. For my readers out in the U of M area, there will be a Ghost River tap takeover today from noon to 3 at Buster’s. You might get some free swag.

MATA will begin testing trolleys soon. No passengers will be allowed, only bags of sand to simulate passenger weight. If they pass the tests, passenger trolleys will start being phased back in by the end of the year.

WWE Monday Night Raw returns to FedExForum on August 28 and tickets go on sale this coming Friday at 10 AM. That will be the second Raw after SummerSlam.

Okay, if you don’t want to read about politics, you can exit this post now without missing any Downtown news. However, if you didn’t read about everything that happened in the White House yesterday, you might want to keep reading.

Breaking News: Steve Bannon now being investigated for Obstruction. This is out of EDVA. Source says he physically threatened WH staffers.

EDVA = Eastern District of Virginia. In subsequent tweets, Claude said that Bannon physically confined two White House staffers, blocking the exits. So he obstructs exits as well as justice. More on that…

Claude, not that this matters, I’m IRL friends with one of four staffers. This occurred on Tue mid morning and she was terrified.
As in 1/2

2/2 blew up my cell (I was in a depo) and was hysterically crying. She was terrified. Bannon wouldn’t let her leave the small conf room

In other news, the House committee investigating the Trump-Russian connection has said it wants to talk to Brad Parscale, who was digital director of the Trump campaign. Here’s a chart showing the connections between Trump, Parscale, and others involved.

You can buy a shit load of bots for $72m. Enough to drown out HRC online campaign (it did) & help sway the U.S. election in Trump’s favor 🔥 https://t.co/ni30wZvMvT

Trump’s longtime lawyer Michael Cohen has hired a lawyer of his own in the Russia probe. When lawyers start hiring lawyers, that’s a sign that things are getting ugly.

Vice President Mike Pence has lawyered up too. Pence’s lawyer has experience with government investigations. He served on the staff of a Republican Congressman during Watergate, and he served as counsel to a senator investigating Iran-Contra. He also represented Sepp Blatter, corrupt former president of soccer’s governing body.

The investigation is gathering momentum so fast that I kinda just want to stay home and reload Twitter every few minutes to make sure I don’t miss anything. However, there is no PBR here at home, so out I go. I’ve been asked to pay a visit to Max’s Sports Bar this afternoon, and I may hit other spots in the area as well – try The Vault for the first time, go over to Earnestine & Hazel’s to see Clarence, and maybe a stop by Cafe Pontotoc to see Michele. No shortage of places to go down here. Back tomorrow with more news. Hopefully more Downtown news than politics, but they way things are going, I’m making no promises.