Saturday will be a big day for dog lovers Downtown. The new Mud Island dog park, sponsored by Hollywood Feed, will open that day. 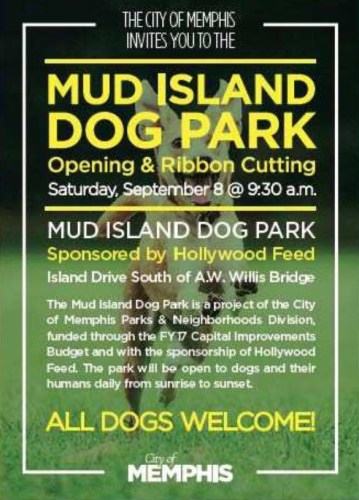 The Dr. Bill Herd Jazz Ensemble will perform at Pop-up Sunset Jazz at Court Square this Sunday from 5 to 7 PM. Food trucks will be available for those who are hungry.

Construction is coming to Poplar and Danny Thomas. The Memphis Business Journal reports that the Union Mission is building a facility west of its current 383 Poplar location that will comfortably house and feed 350 people in a variety of spaces.

There will be a free performance of Shakespeare’s Two Gentlemen of Verona Friday, September 21 at 6 PM at Beale Street Landing.

Cemetery Cinema will return to Elmwood Cemetery on Friday, October 5 with a double feature to get you in the mood for Halloween. The gates will open at 5:30, and you can enjoy rides on mule-driven buckboards around the cemetery as costumed characters talk about those who are buried there. At 6:45, once the sun has set, the first movie will begin, being projected onto the roof of the cemetery’s historic 1852 cottage. The films will be The Wolf Man (1941) and Bride of Frankenstein (1935).

Gizmodo has a list of 9 apps you should try if you want to learn something new every day. I have installed Curiosity and Blinkist and am enjoying them so far.

My trivia team won for the third week in a row at Blind Bear. Early on, Elton John was on the TV in front of us in one of his snazzy outfits, and Cady commented, “Elton John is like an elegant Ric Flair.” Then she said, “That should be our team name.” By now you’ve probably all heard about the op-ed piece in the New York Times yesterday, written by an anonymous senior official in the White House. It confirms one of the major points of Bob Woodward’s book, that White House officials have to contain President Trump’s impulses to avoid situations that would endanger national security. I wonder who this person is. Pence? Mattis?