Memphis has lost one of its true greats in the restaurant, bar, and nightclub scene this week. Bud Chittom passed away this week at age 67. In recent years Bud has grown Blues City Cafe and Club 152 into highly successful businesses, and he was involved with the re-opening of Earnestine & Hazel’s and the Five Spot following Russell George’s death. I knew Bud best from Club Six-1-Six which was my spot back in the ’90s. Bud was always very kind to me, always complimented me on the blog when he saw me around town. Rest in peace, Bud. Memphis is better in many ways, and many people have a lot of cherished memories, because of the businesses you built.

Seth Agranov, former operator of Best Memphis Burger Fest, tagged me in a post this morning. The folks who bought the rights to run a burger festival from him have re-branded it Burgerfest Memphis and have a tentative date of October 27th. The location of the festival is unclear at this time. The logo has a drawing of the Liberty Bowl and says “Tiger Lane,” but the Facebook post announced a location of Bobby Lanier Farm Park in Germantown. That’s a bye week for the Tigers so a game wouldn’t preclude the use of Tiger Lane. I’ll post more details as I get them.

That date for Burgerfest Memphis is later in the fall than they’ve had it in the past. On October 27, you’re looking at normal temperatures of high 71/low 50. If that day is normal or above, everything will be fine. Just got to hope a cold front doesn’t pass through and drop it down into the 30s.

The playoff series, tied at 1-1 between the Memphis Redbirds and Oklahoma City, comes to AutoZone Park tonight. Game time is 7:05 and the first 1500 people get a 2018 playoff rally towel. There is a special cookout ticket that includes burgers, hot dogs and all the trimmings, a free ticket to Game 4 on Saturday, and a free ticket to Game 5 on Sunday (if necessary).

The Peabody is bringing back its Sunset Happy Hour Fridays and Saturdays this month 4:30-8:30 PM. It’s free to go up to the hotel’s rooftop and watch the sun set, and libations will be available for purchase.

I don’t know if I have any readers who go to the Memphis Farmers Market and who own dogs, but in case I do, you’ll want to be at the Market tomorrow where the theme is Treat Your Beasts. Vendors at the Farmers Market sell dog treats made from natural, locally-sourced ingredients, and there are also meat vendors who will sell you a bone for your dog. Free pet-sitting is available while you shop. Featured sponsor Hollywood Feed will have a booth there tomorrow. M4, the Mini-Mobile Metal Museum, will bring the Metal Museum’s smithy and casting to the Market. Kids can get their oink on in the crafts booth 8 to noon, and there will be live local music all day. The Market runs 8-1 every Saturday under the pavilion at Front and G.E. Patterson.

YOGA! Tomorrow there will be an all-levels yoga class on the rooftop of Old Dominick Distillery, followed by “mimosas” with Old Dominick products. $15 includes the class and one specialty cocktail. Check in at 10:30, yoga at 11, cocktails following yoga.

The Brass Door is inviting the public to come watch the USA vs. Brazil soccer friendly at 6:30 this evening.

There will be a free concert outside the Halloran Centre for the Performing Arts next Wednesday, September 12, from 11:30 AM to 12:30 PM. Kirk Whalum will be presented with his Brass Note.

The Travel Channel will be filming at LUNCHBOXeats tomorrow and they are inviting the public to come be on TV. Filming will happen 12:30 to 2 PM.

A man was killed after being hit by a train this morning at South Main and Virginia Avenue.

Disney on Ice presents Frozen is in town for the weekend at FedExForum.

The New Daisy has announced Hoobastank will play on November 16.

Rhonda Vincent and the Rage play the Halloran Centre tonight.

Memphis in May has announced an open call for visual artists to submit work for its 2019 salute. Rather than honoring a country this year, the month-long festival is honoring Memphis for the city’s bicentennial.

So, today I find myself with an important decision to make.

A couple of days ago I blogged that my friend Dennis, who climbed Mt. Kilimanjaro to raise money for St. Jude a couple of years ago, is making a trip to Everest Base Camp to further raise money. Yesterday I got an email from Dennis with an offer to come along…

No, not for me to come along. 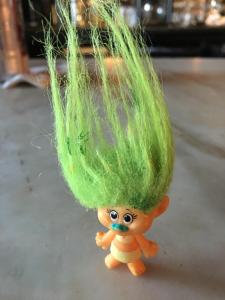 Dennis has invited Perjorie T. Roll to accompany him on his trip. “Perjorie would have stops in Philadelphia, Qatar, Kathmandu, Lukla (including an exhilarating flight into the worlds most dangerous airport), Namche Bazaar, Tengboche, Dingboche, Lobuche, Gorakshep (the original Everest Base Camp), Everest Base Camp, and a side trip up Mount Kalapatthar to see the sunrise over Everest’s peak,” Dennis wrote. He said she would fit in a carry-on bag on the plane and in a backpack hiking up the mountain, and that (connectivity permitting) he could send back a picture of the day to put on the blog. As Dennis points out, not many trolls have been to Mt. Everest, and it would be a great way to raise awareness for his fundraising for St. Jude.

The downside is that I’d be without Perjorie for two-thirds of the month of October and I would miss my little troll terribly. I also need to find out if my BBQ team has any interest in doing Burgerfest Memphis. If there’s a Moody Ques event during the time she’s overseas, that could be a deal-breaker. She is too valuable an asset to the team to miss an event of that magnitude.

Also a concern is, what if she gets lost over there and I never get her back? I trust Dennis completely, and since she’ll be in a carry-on, lost luggage is not a concern. However, Everest is a dangerous environment, and it’s possible that an emergency situation will arise in which the protection of a plastic figurine is not the highest concern. I could get another troll, but there’s only one Perjorie. She’s my scar, a remnant of a deep injury, but an emotional one rather than a physical one. I wish I could say more but this is a public website so I won’t.

I’m going to think about it over the weekend.

Headed to Pontotoc Lounge here in a bit where they have their burger as a $6 lunch special 11 AM to 2 PM. Back tomorrow with more news.