If you want to try some craft cocktails at a very affordable price, come to the Silly Goose this evening between 8 and 11, where there’s going to be some monkey business going on. 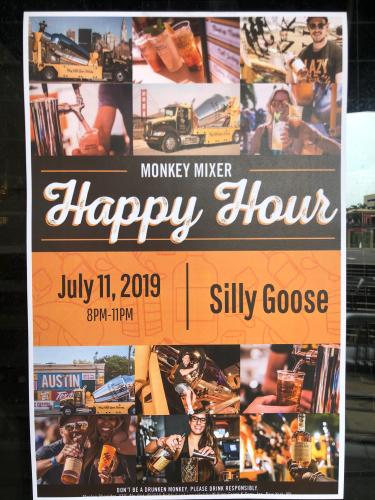 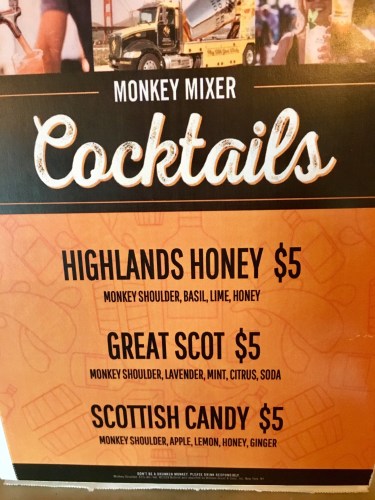 Monkey Shoulder cocktails will be featured during a special happy hour.

To celebrate the week of Bastille Day, Joe’s Liquors and Wines will bring a wine tasting called Joe’s Passport to France to the Puck Food Hall at 409 South Main on Thursday, July 18. There will be over 100 wines to sample, with importers and distributors on site to guide you through the country’s regions. There will be small bites and a live band in addition to the wine. VIP ticket gets you in an hour early, at 5:00, with a few surprises. General admission 6:00 to 8:00.

A free personal development event called Enneagram 901 is coming to Launchpad Memphis, 50 S. B.B. King Suite 350, at 6 PM this Saturday. The event will be led by certified Enneagram coach Milton Stewart. The Enneagram is a theory of personality, apparently. In addition to learning about the Enneagram, there will be opportunities to network and free chili. Free food? Wonder if the Nuh-Uh Girl will show up.

Yesterday I checked my Weatherbug app and found there was a heat index of 113 at 9:30 in the morning. Summer in Memphis!

Amber Rae Dunn and Todd Nations will perform at brunch at Sunrise Memphis this Sunday. The Facebook event listing has the time at 7-10 PM which I’m positive is wrong. Usually bands play brunch there 10 AM to 1 PM.

Food & Wine has an interesting article on the real reason Swiss cheese has holes, and why those holes have gotten smaller or have ceased to exist altogether in recent times.

There will be an American Conference vs. SEC series for men’s basketball this coming season, and Memphis has drawn a home game against Georgia on January 4. This game will be of particular interest because it will feature the nation’s number-one 2019 recruit, Memphis’ James Wiseman, and the nation’s number-two 2019 recruit, Georgia’s Anthony Edwards. Overall, Memphis has the number-one recruiting class and Georgia number-five.

Memphis magazine has a very good article on the Memphis Police bomb squad that is well worth your time to read. The article discusses the training involved and the mindset adopted by the men and women on the squad, as well as what they go on to do once their time on the squad is over. Cheers to those brave folks for keeping Memphis safe from some scary threats.

The first 1000 fans in the gate for the Memphis 901 FC home match vs. Nashville SC next Wednesday will receive a “Defend Memphis” T-shirt courtesy of Terminix. 901 FC will debut new kits for this match.

These Fine Gentlemen will play the King’s Palace Cafe Tap Room starting at 9 PM both Friday and Saturday this weekend.

A new shuttle will connect the Medical Center District and Harbor Town beginning in August. It will run mornings and evenings Monday-Friday, every 15 minutes. This is a partnership between the Memphis Medical District Collaborative and MATA.

The Redbirds are back in town tonight with the first game of a 4-game homestand tonight at 7:05. $2 beers and $1 Polk’s hot dogs. The Redbirds will wear their throwback Memphis Chicks uniforms, and college students can get $5 bluff tickets.

The Grizzlies have addressed their backup point guard situation, adding Tyus Jones. They used the mid-level exception to sign him to a 3-year, $28 million deal despite being over the salary cap. Jones had a massive 6.98-to-1 assist to turnover ratio last year, demonstrating the kind of high basketball IQ Zach Kleiman likes to see in players.

If you’re wondering why I hope Dwight Howard doesn’t play for even one minute in a Grizzlies uniform, read this.

That’s all for now. Back tomorrow.