I got a couple of unexpected treats yesterday on what I thought would be an uneventful trip to South Main. About 4:30 I walked down to Max’s Sports Bar, and discovered the Cardinals playoff game on!

For those of you who don’t know this about me, I grew up watching the Arkansas Travelers, the Double-A farm team of the Cardinals at that time. I had season tickets and got to see many of the stars of the 1980s before they became stars. Although I’m not huge into baseball these days, I can get into the Cardinals when they make the playoffs.

Unfortunately things did not go my way, and the way of most of the other fans in the bar, yesterday, as the Atlanta Braves won to even the best-of-5 series at 1 apiece. The good news, though, is that the series now moves to St. Louis, and since they stole a game on the road, all they have to do is defend home to move on to the NLCS. 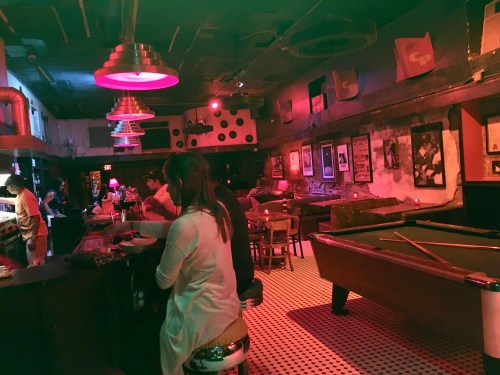 The repairs are done at Earnestine & Hazel’s, which has operated out of the back room (5 Spot) since July. It looks largely the same, just a little bit cleaner. Interestingly, they moved the pool table to the front of the room. I guess that’s so people will see it as they walk by when the door is open. I can’t think of another place in South Main with a pool table so that’s not a bad idea. On the other hand, putting the table there leaves little room for a band. In any event, it’s good to have the legendary dive bar back open.

… back. This is the Deli Turkey Gobbler. 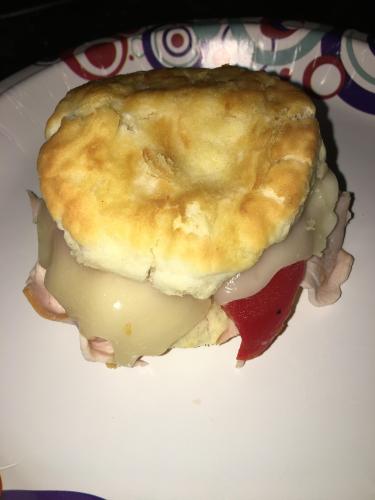 Turkey, Swiss, and roasted red peppers on a hot buttered biscuit. Delicious and they weren’t shy about loading it up with turkey. I think the next time I get this breakfast sandwich, I may experiment a bit and try pepper jack instead of Swiss. The market & deli is on the south side of Court Square, next to Blue Plate Cafe, and is open 8 AM to 6 PM (breakfast until 10:30 AM).

There will be a Victorian Village Home Tour Sunday, October 20 from 1 to 5 PM. Participants will get to stroll along Adams Avenue and get a look inside the historic mansions of the 1800s. Participants will also get to learn about new projects and renovations in the neighborhood. Tours will be docent-led and will provide a unique insight into Memphis history. Tickets are $20-30 and funds will go to the VIctorian Village Community Development Corporation.

The Grizzlies open the preseason with a game against Maccabi Haifa at FedExForum tomorrow at 2. As of Saturday morning there are still tickets available for as little as $5.

As your #1 source of news and information about The Edge District, it is my pleasure to tell you about a combination Dia de los Muertos and Halloween party at Venezuelan restaurant Sabor Caribe, 662 Madison, on Saturday, November 2 starting at 9 PM. The Facebook event description is in Spanish. Google Translate to the rescue:

Next Saturday, November 2, we will be celebrating our customary Halloween party in Sabor Caribe!
We wait for you from 9pm to enjoy good music, good food and drinks in the best Venezuelan style.
Do not forget to bring your best costume, as we will be rewarding the best of the night.
Do not let them tell you … We are waiting for you!
-Saturday November 2
-Cover: $ 5
** 662 Madison Ave, Memphis TN 38103 **
DON’T FORGET YOUR COSTUME!

The Memphis International Auto Show is happening at the Cook Convention Center this weekend. Those of you coming here from out of town to see the auto show, let me offer an insider tip: Take a short ride out to The Edge District and visit the Edge Motor Museum at 645 Marshall while you’re in town.

Cinnamon Maple is the house-made ice cream flavor of the month at Peabody Deli & Desserts for October.

People going to Wine on the River tonight are going to have gorgeous weather and perfect temperatures.

There’s a Creepville Market at Midtown Crossing today. Wonder if they sell Android phones so high middle-aged creeps can drunk text angry messages to female bartenders all hours of the night and then invite them to brunch two minutes later.

Let’s see what we’ve got on the slate for college football today… none of the early games really grab my attention, but at 2:30 on CBS we have #7 Florida vs. #10 Auburn in a game that has big time playoff implications. If the Gators lose this game, they’re probably out of the national championship conversation. If Auburn loses, they will have to win the Iron Bowl against Bama to remain relevant. I don’t really have a preference in this game, but I suppose I will be inclined to root for Florida to thank them for the ass whoopin’ they put on Tennessee two weeks ago.

At the same time on ABC, #11 Texas travels to good ole West Virginny in what some are describing as a trap game for the ‘horns. There’s a danger they could be looking ahead to Oklahoma next Saturday and not taking this week’s opponent seriously. I will be rooting for the boys in burnt orange in this one.

However, I will not be rooting for the girls in prison orange at 6 when they play on ESPN. Georgia is going to wipe up the football field with Tennessee. I’m gonna guess 41-10 Dawgs on this one. No, let’s make it 41-9 because the Vols are definitely incompetent enough to miss an extra point.

It’s going to be a good Saturday. Over and out.