The National Civil Rights Museum has a full slate of events planned for King Day on Monday from 8 AM to 6 PM, including free admission to the museum for all. Get free future admissions to the museum by participating in the food drive or blood drive. There will be performances on stage all day long and plenty for kids to do.

The Daily Memphian reports that Downtown Memphis will soon have a monument to suffragists and the role the Tennessee legislature had in ratifying the 19th Amendment. The statue will be located near the U of M law school. Paula Casey, who pushed for the statue, notes that the unanimous support for giving women the vote from the Memphis delegation was what swung the Tennessee legislature to ratify the amendment.

Penny Hardaway’s Memphis Tigers return to the national stage tonight, hosting Cincinnati in a 6 PM game at FedExForum, to be broadcast on ESPN.

A wrestling star who spent a lot of time in Memphis in the 1970s and 1980s passed away yesterday at the age of 75. “Soul Man” Rocky Johnson frequently challenged Jerry Lawler for championships here in Memphis, and he went on to win the WWF tag team championship with Tony Atlas. Rocky was the father of Dwayne Johnson, better known as The Rock.

I went back to River Time Market & Deli yesterday to get some of that pimiento cheese with bacon to go, and this time I got a photo: 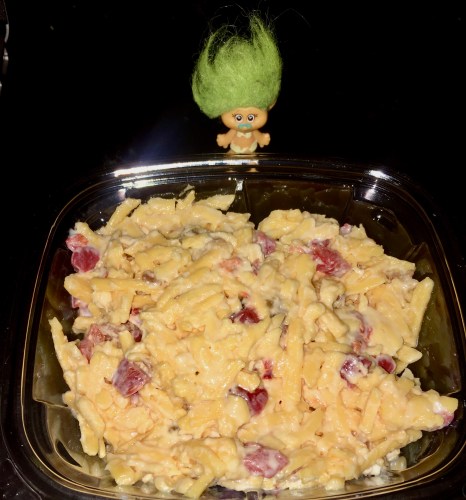 Pam tells me she has ideas for future batches, including ingredients such as jalapenos, red Italian peppers, and Italian salami.

Three medical marijuana dispensaries are set to open in West Memphis. The mayor of West Memphis believes there are Memphians who would consider moving to West Memphis to take advantage of the dispensaries. He is hoping to use tax revenue from medical weed to fund a bus system, which West Memphis has not had since MATA pulled out two years ago.

Pabst is launching a new luxury beer line named Captain Pabst. The line is named for Captain Frederick Pabst, the brewery’s namesake. The first release in the line is an IPA, and it’s available now. As long as they don’t mess with the Cadillac of beers, the Blue Ribbon, I support Pabst in it business expansion.