Thursday night at the Big Foot party, I snapped a couple of pics of regular blog readers. As soon as I snapped one of the pics, I looked at the image on the screen and told them, “That’s a good picture!” To which they immediately replied, “A good picture? Is it blog-worthy?”

So here ya go. These are regular readers Meredith and Melissa: 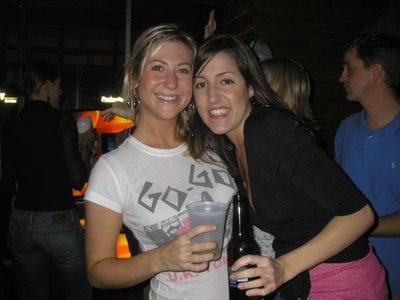 And here’s one of Meredith by herself: 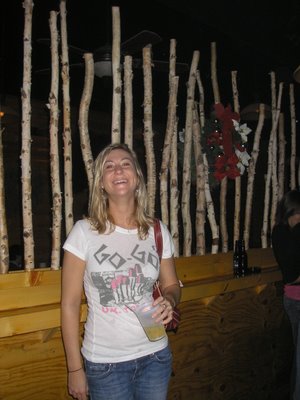 All right… I’m finally caught up on pictures. Yesterday I got home at 4 in the afternoon, woke up at 7 PM, considered whether I wanted to go out, decided against it, went back to bed at 8 PM, woke up at 7 AM. I think I just needed to sleep off the accumulated stress of staying out way too late all week for Christmas events and sitting in a cubicle all day for too many days in a row. I feel great today though. Will probably wander around downtown and see if there’s any last-minute Christmas shopping I want to do. If you go to Sleep Out Louie’s to catch Pam and Terry tonight, look for my stocking (pictured below) hung above the bar. 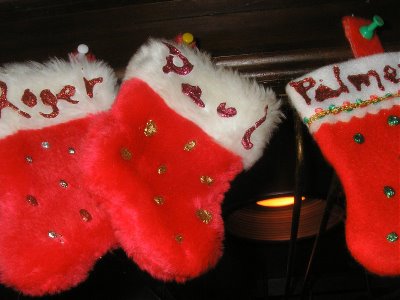 This is my favorite of the animals mounted on the wall at Big Foot Lodge. It’s a bobcat swatting down dinner. The cat is a little bit larger than a large housecat. 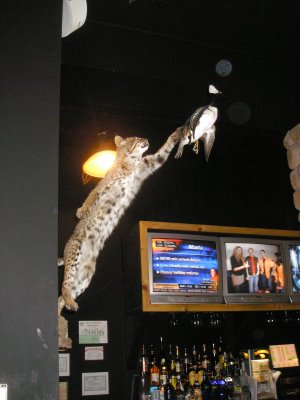 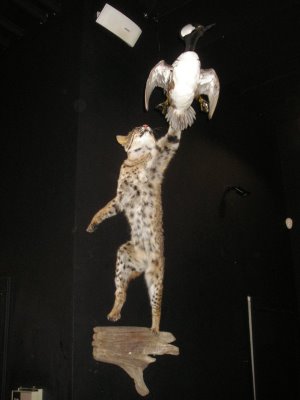 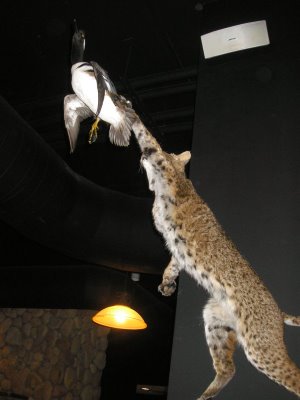 Thanks to everyone at Big Foot for a great Christmas party Thursday night. Good food, good drinks, good people, good times. Big Foot always seems to be able to hit upon the magic formula for great parties.

I will buy you this T-shirt, if you promise to wear it to your next meeting with your boss: 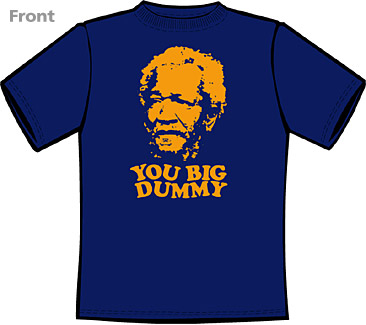 directly into their sound system and play your tunes. Just create a “Louie’s mix” and show it to Smokin’ Lemon or whoever the bartender is. Assuming the songs are all bar-friendly, they can then plug it in and play the mix.

– The Tap Room has removed their stage and I hear they won’t be having any more bands there. That’s both good news and bad news to me. On one hand, they had some damn good bands there – Starunner is the one that comes to mind but I know there were a lot of others. And the funny thing is, the Tap Room was hardly a high-paying gig for them – most of the bands who came there just wanted to play on historic Beale Street where their heroes, and their heroes’ heroes, played. On the other hand, The Tap Room is my favorite bar on Beale because it’s not flashy, it’s not glamorous, it’s just a place where you can have a good conversation. And it’s easier to hear the conversation when a band isn’t playing. Still, though, one of the other regulars predicts the bands will be back by summer.

– Heard a rumor today that Las Margaritas, in the Artesian hotel on McLean that used to be a Ramada and before that a Holiday Inn, will move into the spot that is currently The Happy Mexican on South Second.

– I have more pics from last night to post, but the people involved weren’t wearing tube tops so it isn’t a priority.

For the past two years, I have declared June to be Tube Top Month in my blog. I have used the month to raise awareness of the tube top as an essential clothing item. It has been a very successful endeavor, as several of my readers have told me they wear tube tops more often now.

I will probably do Tube Top Month again next summer. This morning it occurred to me… Tube Top Month ought to have a retail sponsor. I could partner up with a local women’s clothing store/fashion boutique, and make a deal that customers get 10% (or some amount) off tube top purchases for the month of June, if they mention my blog.

Anyone know of a clothing store that might be up for it?

In other news: I’m sitting here at the Union Avenue branch office, and Josh (aka Smokin’ Lemon) has confirmed that there will NOT be a cover charge at Sleep Out Louie’s on New Year’s Eve.

If you’re considering purchasing a new BMW, it might be worth a trip to the south side of Atlanta to do it. Home run leader Hank Aaron owns a BMW dealership there. According to his Wikipedia article, every new BMW bought at his dealership comes with an autographed baseball.

Here’s a good place to go to find lots of deals – gotapex.com

Thanks to regular blog reader Otto for letting me know about this site. It contains current deals, discounts, and online coupons. They seem to be particularly good for finding deals on Dell computers.

About a year and a half ago, I declared June of 2005 to be Tube Top Month. Not sure if people totally got it, I did the same for June 2006, and when the month was interrupted I extended it through July.

I looked upon the month as a public service. An opportunity to educate the public as to what a tube top was, when to wear a tube top, and why.

Well tonight the fruits of my labor have been realized. Regular blog reader Carmel showed up to a Christmas party in a tube top. See below: 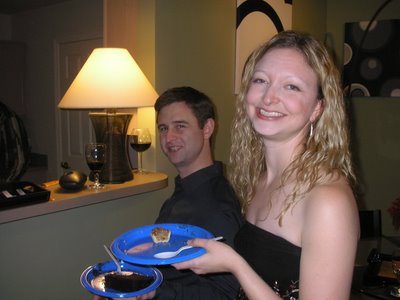 Not only did she wear a tube top, but when I asked her what insipred her clothing selection, she informed me she wore it to impress a guy (not the guy in the pic, just to clear up any misconceptions in advance). The thing is, this is a girl who, 18 months ago, did not know what a tube top was. She kept trying to tell me, “It can still have straps and be a tube top.” NO!!!! But look at her now. Not only does she understand the tube top concept, but she’s using it to impress a guy. I’ve always maintained that there has been a certain educational component to this blog, and today we are seeing the fruits of its labor.

Happy 30th to one of my regular readers by the way.

I live Downtown and work in Midtown. I started my current job in April, and for the first four or five months, I drove down Union Avenue to work. Every day I’d stop at the Exxon Tiger Mart at Union and Cleveland to buy my morning wake-up Mountain Dew.

And I’d say that roughly 75% of the time, between the time I got out of my car and the time I got to the front door of the Tiger Mart, a bum would approach me and say something like, “Hey mayne, hey bro, lemme get a dolla, fitty cent, some change or somethin’.” And it wasn’t always the same bum. They all seemed to know it was a prime begging location.

Back around August-September I discovered that Madison Avenue is a faster route to work than Union. So then I began stopping at the Circle K at Madison and Cleveland for my Mountain Dew.

Circle K has signs up that say “NO LOITERING, NO SOLICITING” in big, bold letters. And up until today, I never, EVER saw a bum anywhere on their premises. Today for the first time I saw one, and in the minute and a half I was there the cashier notified him twice that the police had been called and he’d better go, literally chasing him off the lot the second time.

Thumbs up to Circle K for handling that problem. Nice to see a store that respects its customers enough to ensure that they won’t be harrassed by panhandlers, beggars and bums as they go about their business on store property. I’ve been buying my Mountain Dews at Circle K, but I’m going to start buying my gas there too from now on. Thanks Circle K for helping to clean up this city.

I went out at 9:30. I meant to have one beer at the Saucer and then come home.

When I got to my front door, it took me 2 minutes to figure out how to insert the key into the lock.