Thanks to my friends Chuck and Robin for a great Thanksgiving dinner Thursday afternoon. I went over to their Barton Flats condo and we had turkey, shrimp linguini, bacon-wrapped green beans, salad and other goodies. Robin had some of her U of M colleagues over, and since I used to teach I felt right at home talking with them.

After we ate, Chuck whipped out the most hilarious board game I have ever seen in my life: 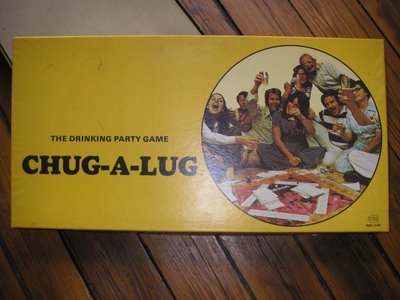 It was called Chug-A-Lug and it was a drinking board game from 1969. Chuck told me his mom was about to throw it out and he saved it from the trash can. Why would someone throw out a classic like this? Not only was it a drinking game, but it was a HIPPIE drinking game. Let’s have a look at the board (click for larger image): 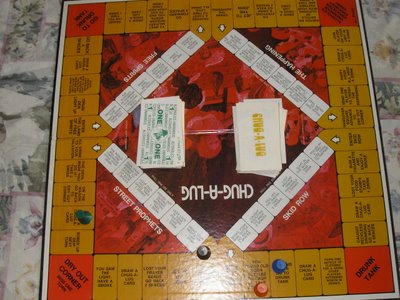 It’s a total hippie game. You can get sent to “The Happening” where you can land on squares like “caught in bedroom with best friend’s date. Both chug.” There’s a “free spirits” section with squares like “demonstrate your brotherly love with members of the opposite sex.” The “skid row” section has a square that reads, “Lost welfare check. Panhandle. Take 2 drinks.” (Wait, is that 1969, or 2007 Downtown Memphis?) There’s a square on the main path that reads, “Opium den. Light up.” Another reads, “Praise the Pill. Take 1 drink.”

The object of the game is to pass the Alcoholics Unanimous Association (equivalent to Go in Monopoly) and collect Alcoholics Unanimous cards. First person to collect 10 of them wins. However, it’s near impossible to make it all the way around the board without being detoured into The Happening, Skid Row, Street Prophets, or Free Spirits. If you play this game you better have a LOT of alcohol on hand, and either a designated driver or place to crash.

This is a bad pic but here are the game’s rules (click for larger image that’s at least somewhat readable): 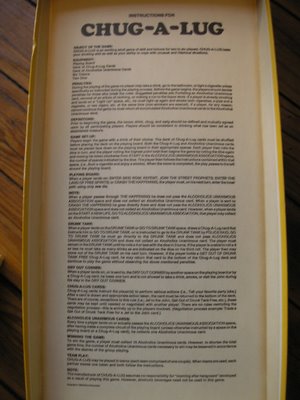 We have got to play this game again… I suggest we recruit some girls to play it with us though. I bet this would sell for a lot of money on eBay.

Got to the Saucer at 5:20 on Thanksgiving Day. It opened at 5 and the manager looked at me like “you’re late” when I walked in. One of the waitresses offered to buy me a Fire Sale if I’d go home and change into the red disco outfit I wear to Raiford’s. I made her up the offer to a Dos Equis Special Lager, then agreed and went home and changed clothes. Hey, it doesn’t take much to get me to agree to make a fool of myself! Despite the free beer I managed to run up my highest tab ever at the Saucer – $99 including tip – after I started doing shots with a friend.

The same waitress informed me that every year there’s a big Thanksgiving party at E&H, so I headed up there about 11. It was pretty packed and even Nate’s bar was open. Sorry for not blogging in advance about the party but I just didn’t know – I’ve never been in Memphis for Thanksgiving before. It was a great time and the fact that I was already WASTED when I got there didn’t hurt. The waitress who told me about the party and her little zebra-haired sidekick showed up, and earlier in the evening they had the audacity to claim that I couldn’t keep up with them on a dance floor. I busted out moves previously only seen at Raiford’s, and proved that I was not only their equal, but their superior when it comes to dancing. Got home that night about 3.

Friday recap: This’ll be short and sweet. HOW ‘BOUT THEM HAWGS!!!!! All season long I’ve had to endure East Bumblefuck Kat trash-talking Arkansas on her blog. Well, Kat, we beat the #1 team in the country, so STFU and go back to planning your Ptolemy parties. Besides, it’s not like your teams (Arkansas State and Ole Miss) are anything to be proud of.

Watched the game in the comfort of the couches at (can you guess it?) the Saucer. Attn waitresses: Please do not bend over to pick up dishes when important plays are happening. I missed seeing two touchdowns yesterday because of that. I assumed Arkansas would get their ass kicked and so I didn’t show up in my Hog Hat. By halftime I was regretting not bringing it. Yesterday made me proud to be a Hog fan! The Razorbacks improved their record to 8-4 and now have a shot at being invited to a decent bowl game.

Ole Miss blew a 14-0 lead to lose yet again. God the Rebels suck.

And that brings us to today. I have absolutely no plans for today, so you know where I’ll probably end up. I’ll do some more work on the “trip down memory lane” post this morning too.

Brunch tomorrow is at the Majestic at 11, followed by a trip to you-know-where at 1.