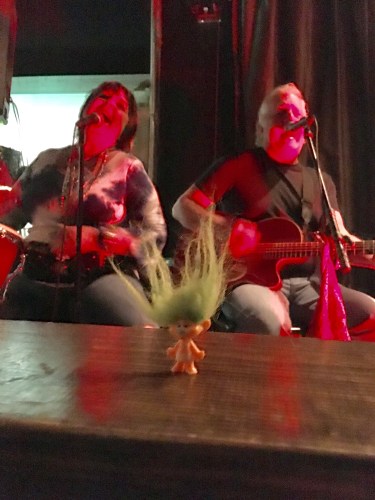 Pam & Terry love posing for photos with their fans. Last night they played Blind Bear and their newest fan, Perjorie T. Roll, got her photo opportunity.

About a week ago, I was sitting in Max’s Sports Bar watching TV, and a man named Duncan introduced himself. He told me he was opening a new restaurant in the former Double J building across the street. He said it would be called The Vault (because at one time that building was a bank) and that he would serve Creole and Italian food, and maybe some steaks. The cat is out of the bag now, with the Flyer reporting on The Vault yesterday. It could be open as soon as the beginning of next month. Each booth will have its own TV, and both downstairs and upstairs will be open.

archimania, the award-winning architecture firm currently located at 356 S. Main, has dropped plans to move its headquarters to a building at Main and Carolina. They apparently feel that their business would stick out like a sore thumb in a neighborhood that has unexpectedly blossomed with new apartment dwellings. They will seek a location elsewhere Downtown, or in Midtown.

Not much news today, but that’s all right; it’s going to be beautiful outside! Time to go hit the usual spots and celebrate a very productive week.