For the past few weeks, Seth from Best Memphis Burger Fest and a few other folks have been working on putting a new Memphis food festival together, and yesterday they made the announcement: 901 Popper Throwdown is happening Saturday, March 25. This will be a cooking competition to determine who makes the best jalapeno popper in Memphis. Here are the rules if you want to enter. Entry fee is $60, $65 counting credit card fees. The event will be held at High Cotton Brewing Co. at 598 Monroe. Teams will be able to hand out samples in exchange for donations to Memphis Paws, Inc., an organization that provides funds to animal rescues. There will be live music, a jalapeno eating contest, and great craft beer.

A few minutes after Seth announced the popper fest, he made another announcement: He’s looking for judges. With a regional in Atoka the following weekend, I knew the Moody Ques wouldn’t be competing in Popper Fest. I texted the team president and asked if the team had anything scheduled for March 25.

So I filled out the judging application! I love spicy food. One of the questions was “what is the spiciest food you have ever eaten?” I gave two answers: One is that I have a bottle of Crazy Good ghost pepper sauce that I sprinkle on fries and whatever else needs to be taken up a notch. Also, one time I ordered a seafood curry at Bangkok Alley and asked them to make it spicy. They asked how much on a scale of 10 and I told them 9 out of 10. YIKES! I only did that once. I have since settled at 6/10 as my comfort zone there. Given that I’m not a certified food contest judge, there’s no guarantee that I’ll be accepted, of course. However, I do have judging experience (the first Best Memphis Burger Fest), 10 years experience on a BBQ Fest team, and 4 years experience on two Burger Fest teams. We’ll see what happens. Maybe all the certified judges will be busy that day.

I decided to visit Clarence at Earnestine & Hazel’s yesterday morning, then got to Max’s a few minutes after 11 to get a good seat. Good thing I did – an hour later the place was PACKED! By 1 PM every square foot of Max’s was filled with people waiting in line to get tickets for boxes of crawfish, and for beer.

The crawfish are big for this time of year! 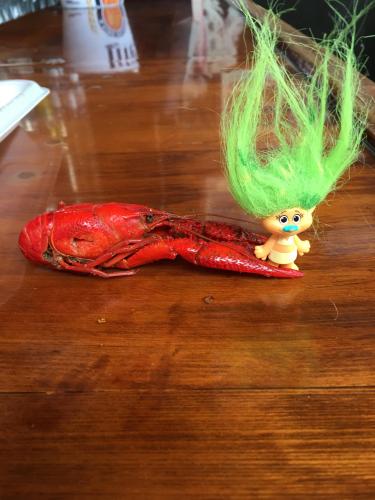 This must be one of the best crawfish seasons ever. Normally you don’t see crawfish in Memphis until the last week of February. Not only are they here ahead of schedule, but they’re already the size of the ones usually served at the crawfish festivals in April. I wonder what they will look like at the boils at Max’s at the end of the season in June. At what point do they stop being crawfish and start being lobsters?

Due to the size of the crowd, they ran out of crawfish about 2. Glaze told me that he brought 4 bags of crawfish. They’re going to do the next boil at Max’s two Saturdays from now, and Glaze is bringing 6 to 8 bags.

The Memphis Tigers men’s basketball team has a home game this afternoon, hosting Temple at FedExForum at 1:00.

That’s it for now. I’m going to catch up on my WWE Network subscription (new episode of Legends with Stan Hansen just dropped) then off to D-RANKS with B-RAD at Blind Bear at 11.