Every year during Music Fest, Beale Street is invaded by wacko Jesus freaks who carry big signs and preach that we’re all going to hell for drinking, fornicating, dancing, listening to music, etc. Here’s a sampling of the signs. Click on a pic for a larger image. 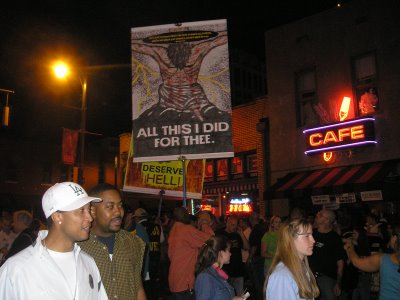 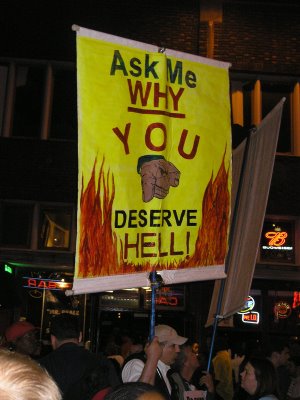 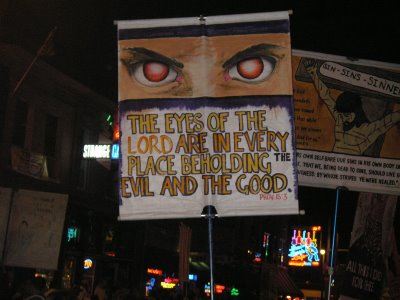 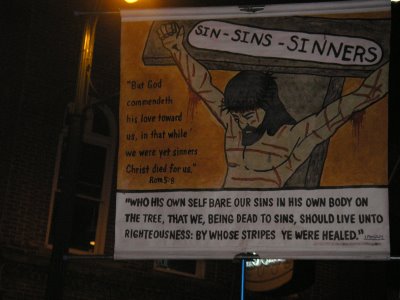 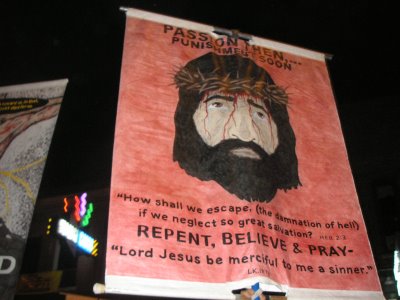 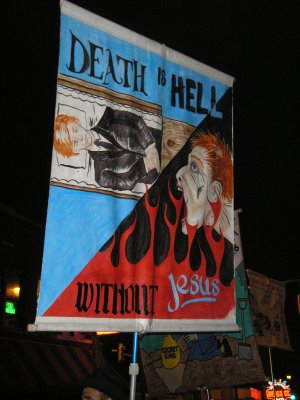 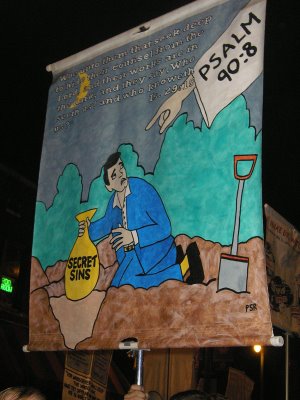 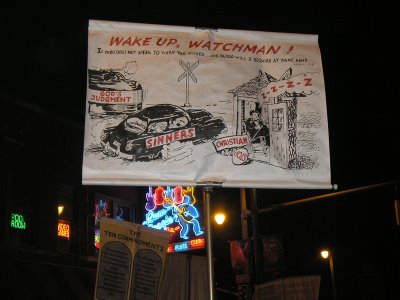 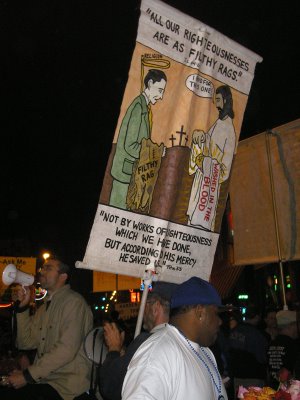 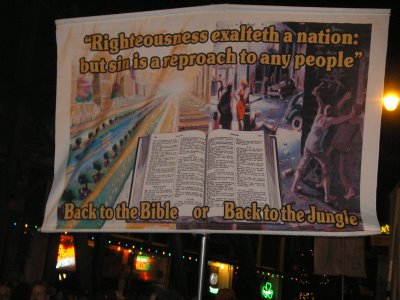 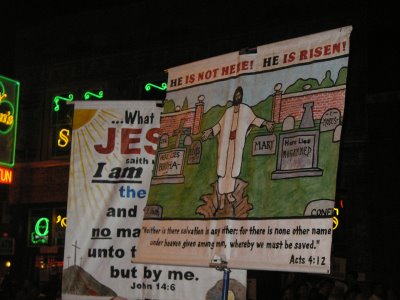 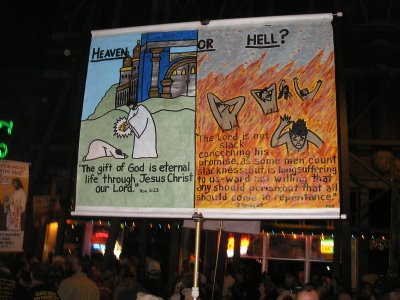 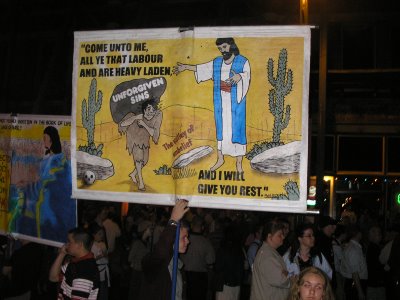 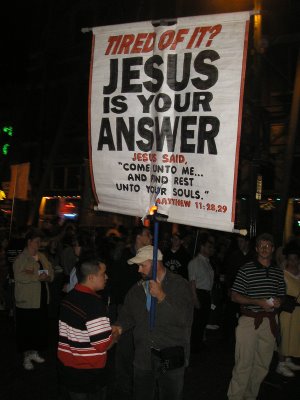 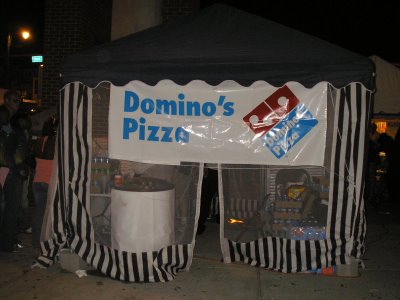 The Domino’s Pizza tent in the Pepsi Pavilion, corner of Third and Beale: Slices of pepperoni, sausage, or cheese for two bucks each. When it’s midnight and you have the drunk munchies, it’s this or have a sit-down meal at one of the restaurants for ten times the price.

I doubt I’ll eat anything but Domino’s this weekend. It’s a Music Fest tradition.

So I was walking down Second tonight and I saw The Most Annoying Woman On The Planet at the bar at Big Foot, so I stopped in for a drink. They had a new free hand-out magazine at the bar, called Image Magazine. I flipped through it as I drank a Corona. I arrived at a horoscope page called Horrid Scopes, and I looked at my horoscope (Scorpio):

“Your latest tube-top ensemble will be the big hit in the Jerry Springer greenroom.”

My only complaint is that this issue of the magazine was dated May 2006. It would have worked better as the June horoscope, since I’ll be doing Tube Top Month in this blog in June.

Commercial Appeal people: Are you glad yet that I turned down your offer to blog MIM? Because this is going to be the quality of my posts all weekend.

A couple of months ago, Project:Motion had a fundraiser in Cooper-Young. I got there about 7 on a Sunday night, so I had been drinking for 8 hours already, having started at Sleep Out’s for brunch at 11 am. Therefore, I was pretty hammered when I got there, even more so after an additional three glasses of wine. I had just been offered the City Schools job that I now have, at a substantial pay increase above what I was making at the time. So, on my way out the door I saw a pledge form and thought, “What the hell.” I donated 50 bucks.

Tonight I went to Project:Motion’s dance performance, Metallurgy, and discovered my name on the back of the program, one of about a dozen listed as a “Community Producer.” Wow, that makes me sound important, like I’m a real patron of the arts! Totally didn’t expect that. Actually, when I donate money to these things I usually prefer to do it anonymously, because I don’t like the idea of giving just to be known as someone who gives. But, it’s a small community dance troupe. I don’t mind.

Before the show I had dinner at the Blue Monkey, and I’m pleased to report that the twice baked potato is still the key to the entire operation.

Music Fest begins tomorrow. Expect some drunk posts this weekend, unless I’m too drunk to post.

Quoting Traian Basescu, president of Romania: “The computer is the second steadiest, most efficient, and fair partner after a man’s wife.”

I’ve been on a shopping spree the past couple of days, preparing for this weekend and beyond. Here’s a list of what I bought:

I already have rum, gin, vanilla vodka, tequila, amaretto, and triple sec in the apartment. So I should be well set up for this weekend, although I should probably stop by the grocery store and buy some individual bottles of cranberry.

I’m taking Monday (day after Music Fest or “Hangover Day”) off, so this should be a big weekend. I told my work I need Monday off because there will be drunk people doing some post-Sunday Music Fest partying who will be screaming outside my window at 4 AM. What I didn’t tell them is that I intend to be one of those people doing the screaming.

Life In & Around Memphis: Top 10 Reasons to Skip Music Fest

I’ve changed my mind. I won’t be attending the Dempseys show tomorrow night on the Madison rooftop. Instead, I will be going to the Project:Motion dance performance Metallurgy: The Properties of Dance at TheatreWorks, 2085 Monroe in Midtown near Overton Square.

Reason for changing my plans: My friend Carmel is a member of this dance troupe. I was aware of the possibility that I might have to miss this performance altogether, as every date on the performance calendar turned out to be a conflict for me. So anyway, this afternoon, she sent me an e-mail offering her opinion on whether I should enable comments in my blog: “I’m not sure I like the comments idea for your blog. It sort of loosens your ownership of it.” BINGO! Exactly. I’m going to write up a post explaining my views on this further, except it will be about 100 times less succinct than what she wrote. She’s the only person who has responded who has summed up how I feel about it.

She also wrote that she understood if I chose the Dempseys show tomorrow night over her dance performance. And as I read that, I thought, I know so many people who would have gone into histronics… who would have gone, “Some stupid rooftop party is more important than ME??? I guess I don’t matter to you AT ALL.” But she didn’t… she wanted me to come if that’s what would make me happy, and if I didn’t come she realized it wasn’t a personal insult to her.

So… guilt and obligation don’t motivate me to change plans. But, realizing that I have friends who are priceless does motivate me.

So, here’s the new plan for tomorrow night… after I get off work I’m going to hit the Blue Monkey for happy hour. I’ll be there from about 5:00 until time to walk over to TheatreWorks, about 7:30 probably. If anyone wants to meet me at the Monkey or at the performance, shoot me an e-mail or call my cell. Tickets to the performance would normally be $15 but tomorrow’s is pay-what-you-can night.

Speaking of the Monkey… I had lunch there today. First time I’ve been in the Midtown Monkey since the Downtown one burned down, believe it or not. I talked with the owners and one of the cooks for a while… it felt like home. I’ll be spending more time there in the future. The cook told me that he’s making his special white chili for Cinco De Mayo on Friday, so I’ll probably show up for lunch then too.

The Monkey still needs wine and champagne corks to decorate the soon-to-be-rebuilt downtown location… so be sure to save them. Hand ’em off to me if you need to, and I’ll make sure they make it to the Monkey.

I just downloaded the Wine Race pics that I took last Sunday, and good god are they awful. Trying to take pics after drinking two Call-a-Cabs isn’t a good idea… pics completely out of focus, pics where my fingers were blocking the lens. I should have handed the camera off to Mikey aka The Camera Nazi – he would have done much better. I’m especially annoyed that the pic I took up the skirt of The Most Annoying Woman On The Planet (she was standing on Pat O’s balcony, I was on the street) didn’t turn out. Although, I did get a few good boob shots of the bikini top she had on for part of the afternoon.

Kat is offended that I wrote that she’s once again my favorite blogger. “How the ‘eff did I ever NOT become your favorite blogger?” Jeez. I can’t seem to please anybody.

The judicial candidate on the roof last night was Evan Nahmias, and he’s running for General Sessions Civil Court Judge, Division 5. Vote for him in the next round of elections in August (I think it’s August) – he gave me free beer.

Time to sign off and prepare for Music Fest weekend – gotta make sure I have adequate supplies of booze, cups, mixers, etc. in the house, and I should at least try to get the place somewhat clean.

In recent weeks on WWE Monday Night Raw, WWE chairman Vince McMahon has been getting fed up with one of his main-event wrestlers, “The Heart Break Kid” Shawn Michaels. So, at the most recent pay-per-view, Mr.McMahon and his son Shane challenged Michaels, a born-again Christian in real life, to a tag team match. Michaels’ tag team partner for the match was none other than… God.

In a shocking turn of events, God no-showed the match, leaving Michaels on the receiving end of a 7-on-1 beatdown by the McMahons and the 5-member tag team The Spirit Squad.

I guess this means that, in wrestling lingo, God has “turned heel,” or turned into a bad guy. Abandoning your tag team partner is one of the most common ways for a former good guy to turn heel in the world of professional wrestling.

The judicial candidate who gave away the free beer on the roof last night seemed like a pretty nice guy, so I’d be willing to mention his name… except I can’t remember it. Evan something. Last name begins with an N. Can’t remember what exactly he’s running for either. If anyone has the info, shoot me an e-mail.

I’m taking the night off from going out tonight, because I need to do laundry and sort through the 100 or so pictures I took at Beale Street Wine Race. Tomorrow night the Dempseys are playing the Madison rooftop. And of course, Friday-Sunday I’ll be having as much fun as possible downtown WITHOUT going to Music Fest.

That’s the news for now… off to work.

So I came home this afternoon, and as I walked into my apartment building I found the following posted next to the elevator:

“Reception for (some guy whose name I can’t remember),
candidate for (some judicial position)

On the rooftop of No.10 Main

Free beer and wine will be provided”

Needless to say, I couldn’t give two flying shits about meeting this guy… but since he said the magic words, I’ll go up there and drink his free beer. I don’t feel an ounce of guilt about doing this either.